TechMate evenings are for girls from Grade 4 – Grade 6 to invite a significant male in their lives to join them for an evening of designing, creating and building sometimes with technology and sometimes without! This term TechMates were introduced to the life and times of Reuben Garrett Lucius Goldberg (July 4, 1883 – December 7, 1970), best known as Rube.

He was an American cartoonist, sculptor, author, engineer, and inventor, but was probably best known for his popular cartoons depicting complicated gadgets performing simple tasks in indirect, zany and convoluted ways. Rube Goldberg is the only person ever to be listed in the Merriam Webster Dictionary as an adjective! It’s estimated that he did a staggering 50,000 cartoons in his lifetime. 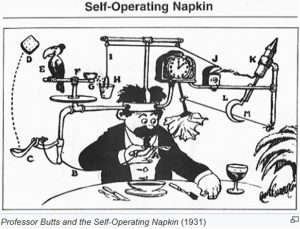 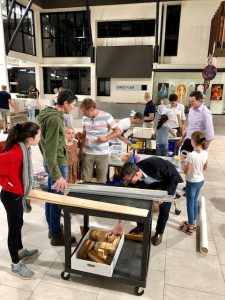 After watching some Rube Goldberg machine videos our TechMates went off to think of a simple task to complete and then designed a fun and crazy way of completing the task. Everyone gathered materials and equipment, sketched possibilities, planned and started to build. The photos show how much problem-solving, testing, redesigning and building took place with plenty of ‘ooows’ and ‘aaahhhs’ and laughter!

Of course, I had to create a video of the evening and see the amazing Rube Goldberg machines everyone created 🙂 Well done on a fabulous evening of engineering with anything and everything…..to complete such simple tasks as popping a balloon, rolling a car, making a smiley face, toppling a TV box and launching a plane! 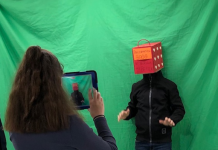 Making and Creating with Augmented Reality.