Last term in STEMies Club we dived into designing ‘Draw Bots’. The girls drew and re-drew ideas to create an interesting ‘creature or thing’ which could be the body of their work. Then selecting materials from the Makerspace the ‘making’ started. Glue guns, hammers, nails, saws, hacksaws and wire strippers were in demand. Skills some girls had never tried before! 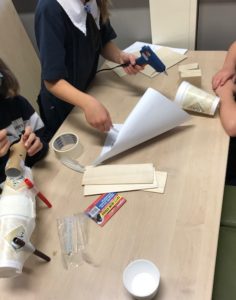 Understanding circuits is required for this task and how to add a switch into the circuit. It did not take long for all the girls to either design their own switch with items like pencils or paper clips, which connected the circuit, or to include a press or side-switch to the circuit.

Finally, textas were added as legs and then turned on to see what each bot could draw. Lots of excitement and fun as a few had minds of their own and just took off! Others went in circles or so slowly they nearly stopped, some backwards and one collapsed with the attention!

Zahra, a keen club member, who has enjoyed working in our library Makerspace for the last couple of years (especially with motors) wanted to make a toy for The Royal Queensland Show (EKKA). Taking some equipment from the Makerspace she made at home an incredibly detailed ‘Crab’. Her entry won her division…….well done Zahra 🙂 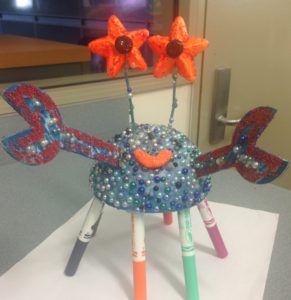 So much fun and learning again this term, well done girls 😊 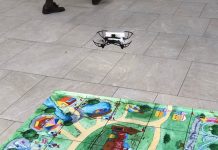 Drones in the Primary Years. 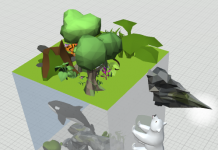